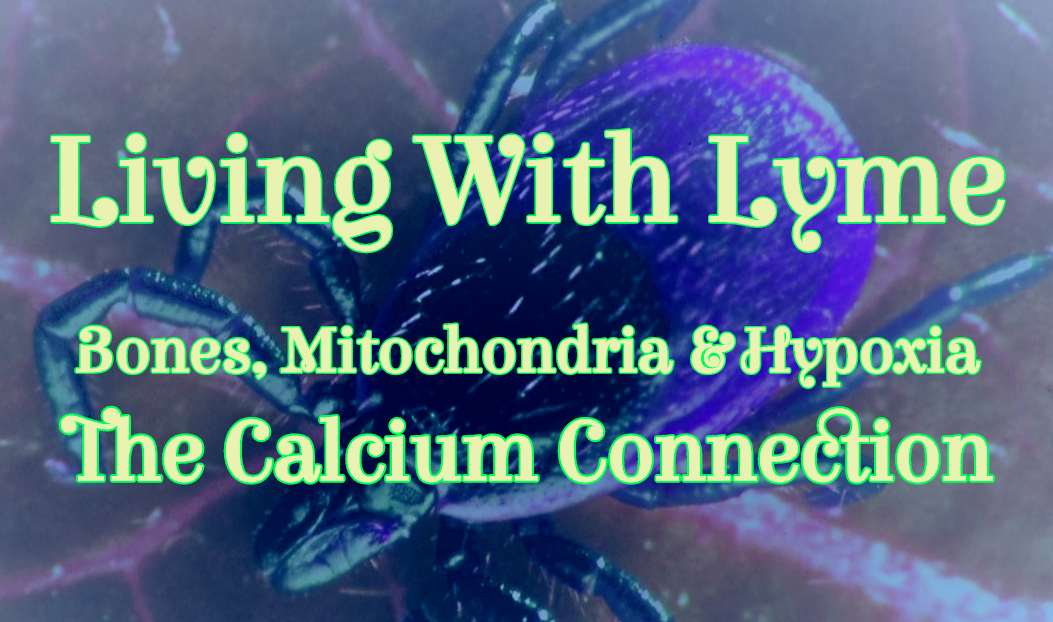 Lyme disease is the most common vector-borne disease in the Northern Hemisphere. The infection affects multiple organ systems, including the skin, joints, and the nervous system [1].  Borrelia burgdorferi, a member of the spirochete phylum, was first identified in 1977 as the causative agent for Lyme disease. In 2016, The Centers for Disease Control and Prevention, in collaboration with Mayo Clinic and health officials from Minnesota, Wisconsin, and North Dakota, reported the discovery of Borrelia mayonii, a new species of bacteria that also causes Lyme disease in people. Researchers believe that both B. burgdorferi, B. mayonii are transmitted to humans by the bite of infected blacklegged ticks [2].

B. burgdorferi is a highly adaptive bacteria that can modulate its gene expression in order to adapt to different environments within two uniquely different hosts – tick and mammal. It has also been found to adapt its gene expression during different times within the same host. B. burgdorferi replicates and survives without producing virulence factors such as lipopolysaccharide, toxins, unlike other pathogenic bacteria [3].

Once a patient is infected, this spirochete is extremely difficult to eradicate as it is able to evade the host’s immune system, while being resistant to antibiotic treatment.  It is believed that only 25-30% of patients with early Lyme disease recall the tick bites. The low rate of detection of the microbe in blood of infected patients further compounds the difficulty in accurate diagnosis and treatment of the disease [4].

Even though Borrelia burgdorferi was discovered only in 1977, this spirochete has quite an ancient history in humans. The earliest record of a B. burg­dorferi infection in mankind was reported when evidence of lyme infection was detected in mitochondrial DNA extracted from the hip bones of the famous Tyrolean Iceman Ötzi [6], who lived in different valleys in the southern region of the Alps 5.300 years ago [7].

Analysis of the mitochondrial DNA from Ötzi’s bones showed that B. burg­dorferi resided deep within his bones, suggesting that Ötzi could have suffered from significant bone loss as a result of his Lyme disease [8].

If antibiotic treatment is not administered during early infection stage of Lyme disease (typically within 1-2 weeks),  B. burgdorferi can migrate to more distant tissues, causing Lyme arthritis, carditis and neuroborreliosis to develop at later stages.  Lyme arthritis is probably the most common in North America, affecting as many as 60% of untreated patients [9].

Our bones maintain physiological homeostasis and systemic responses to infection, injury and other stressors [10].  Infections within bone and the accompanying systemic inflammatory responses to infection at other sites may result in significant bone loss [11].  B. burgdorferi has been detected in bone and marrow of humans and dogs, including the Tyrolean Iceman from 5,300 years ago. Why does B. burgdorferi hide in bones, causing bone loss?

In an experiment in 2017, scientists infected healthy mice with B. burgdorferi.  They found that increased DNA copy number of the spirochete correlated with dramatic reductions in areal (grams per square centimeter) and volumetric (grams per cubic centimeter) bone mineral density in the trabecular regions of femora [12].  There was also a significant colonization of B. burgdorferi spirochetes in the bones of infected mice [12].

Interestingly, the bone loss detected in infected mice was associated with reduced osteoblasts.  Osteoclast numbers and activity were not affected at all [12].

Even though it is possible that increased osteoclast activity produced bone loss in the mice infected with B. burgdorferi, evidence from the study led scientists to believe that at around 4 weeks post infection, bone loss was primarily due to osteoblast inhibition. Osteoblast deficiency in infected mice contributes to long-lasting effects in decreased bone mineral density [12].  What causes osteoblast deficiency in those infected mice?

Hypoxia describes a condition where there is an inadequate oxygen supply to tissues and cells that will restrict their functions.  The main physiological response to hypoxia is the induction of hypoxia-inducible transcription factors HIF-1 and HIF-2. Where HIF-1 drives the initial response within the first 24 hours, and HIF-2 is responsible for chronic response to hypoxia [14].

Under normoxia (normal oxygen levels) the HIF proteins are degraded. When oxygen levels are low, HIF is stabilized and subsequently translocated to the nucleus, forming a heterodimer with HIF-1β to regulate target genes that are responsible for controlling cellular processes including angiogenesis, energy metabolism, cell proliferation/survival, and matrix metabolism. In fact, HIF is a major transcriptional regulator of cellular responses to hypoxia through the regulation of gene transcription and modification of nucleosome organization [15]. 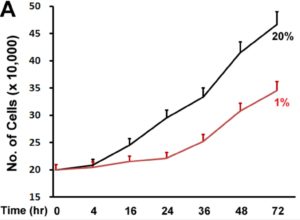 What do you think would happen to osteoblasts cultured under hypoxic conditions if HIF is inhibited? 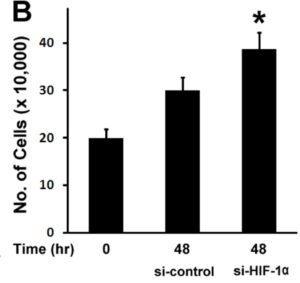 Chen et al. cultured osteoblastic cells under hypoxia for 48 hours. One set of cells were controls, the other had their HIF-1a expression inhibited by si-RNA.  The osteoblastic cells with HIF-1a knockdown showed increased growth versus controls under hypoxic conditions [16]. The fact that the cultures were maintained in hypoxic conditions for 48 hours is important because a 2019 study found that HIF-2a, which is activated after 24 hours of hypoxia, is an inhibitor of osteoblastogenesis and bone mass accrual [17].

Why is HIF important in Lyme disease?  Because in early Lyme disease, patients are often found with enhanced levels of HIF-1a.

In 2016, scientists analyzed transcriptomic profiles (RNA molecules) of patients diagnosed with Lyme disease.  HIF1A mRNA were found to be significantly upregulated in peripheral blood mononuclear cells (PBMCs) at the time of diagnosis, and two weeks thereafter.  The scientists also discovered that genes in the glycolysis pathway also showed extremely elevated expression levels [18].
Why is HIF and glycolysis enhanced in Lyme disease?

Aerobic glycolysis, also known as the Warburg effect, is usually initiated by the PI3K/Akt/mTOR pathway.  Cells stimulated by Borrelia burgdorferi exhibited increased activation of these signaling molecules [18].  HIF-1a is a transcription factor with a crucial role in regulating glucose metabolism.

The cytokine response induced by B. burgdorferi is closely tied to elevated HIF-1a expression.

Cytokines are a crucial component of the immune system, with important roles in both antimicrobial host defense and the  pathophysiology of immune-mediated diseases. A switch in glucose metabolism in immune cells is crucial for induction of cytokines by Borrelia.

I am sure you are wondering why increased host proinflammatory responses are unable to completely eradicate Lyme infections. The answer lies with bones and calcium.

Even though Lyme disease is a multisystem disorder, the most common late-stage complication of this disease is oligoarticular arthritis, often found in the knee.  In many cases, arthritis persists even after appropriate antibiotic treatment, resulting in chronic inflammatory arthritides [21]. Why does this spirochete love to hide in bones and destroy bone mineral density?

In 2012, Sapi et al. described the formation of biofilms by Borrelia burgdorferi in vitro.  They showed that B. burgdorferi is capable of developing aggregates on different substrates. These aggregates were predominantly composed of an alginate with CALCIUM and extracellular DNA [22].

Since then, many in vitro and in vivo studies have associated antibiotic resistance and recurrence of Lyme disease with biofilm-like aggregates in B. burgdorferi, B. afzelii, and B. garinii.  Biofilms allow these different strains of Borrelia to resist and survive adverse environmental host conditions, including pH variations, nutrient starvation, host immune system attacks, or the presence of antimicrobial agents [23].

Bacterial biofilms are extremely resistant to environmental agents and antimicrobials. This is perhaps the primary reason for the chronic and recurrent infections in Lyme disease. Within biofilms, bacteria are physically joined together producing a matrix, characterized by the presence of extracellular substances formed from proteins, calcium and extracellular DNA [24].

B. burgdorferi does not produce calcium. It must obtain essential nutrients like calcium from its arthropod vector and mammalian host [25].  It is entirely possible that B. burgdorferi utilize calcium from hosts to produce the necessary biofilm to ensure protection and survival in hosts. Cytosolic calcium ions in  peripheral blood mononuclear cells (PBMCs) of Lyme patients are often significantly reduced.

Lyme patients often show increased levels of oxidative stress with a significant elevation in mitochondrial superoxide production. This is observed in conjunction with a dramatic reduction in cytosolic ionized calcium in  peripheral blood mononuclear cells (PBMCs). If these symptoms are not corrected, over the long term, these conditions will result in mitochondrial dysfunction [26].

Ionized calcium (Ca2+) serve critical functions within cells, including the maintenance of cellular and mitochondrial membrane potentials, gene regulation, cell proliferation and apoptosis.  Homeostasis of Ca2+ levels in the cytosol is tightly regulated, with reserves stored in the endoplasmic reticulum or mitochondria [27]. Inflammation or infection can cause fluctuations in cytosolic calcium.

Peripheral blood mononuclear cells (PBMCs) from rheumatoid arthritis patients exhibited a 22% decrease in resting cytosolic calcium when compared to un-afflicted patients [28].  When scientists examined PBMCs from Lyme borreliosis patients and compared the results to healthy controls, they found mitochondrial superoxide to be much higher in Lyme patients.  On the other hand, significantly low levels of cytosolic ionized calcium were observed in Lyme borreliosis patients, when compared to healthy controls [29]. 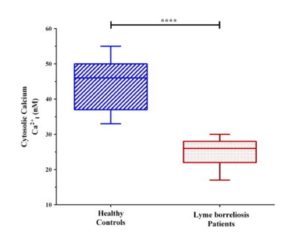 The imbalance between reactive oxygen species and cytosolic calcium in Lyme patients suggest that oxidative stress and interrupted intracellular calcium signaling may contribute eventually, to a condition of mitochondrial dysfunction in the immune cells of Lyme patients.

Hypoxia-inducible transcription factors (HIF) are also heavily implicated in tumorigenesis, where HIF1a is found to be overexpressed in many cancers. Yet HIF is our body’s  primary response to fluctuations in cellular oxygen levels. How do our bodies control HIF regulation and why is Vitamin C, ascorbic acid, indispensable in the regulation of HIF?  ……… To Be Continued ……..

[4] The Accuracy of Diagnostic Tests for Lyme Disease in Humans, A Systematic Review and Meta-Analysis of North American Research https://www.ncbi.nlm.nih.gov/pmc/articles/PMC5176185/

[11] Apoptosis-associated uncoupling of bone formation and resorption in osteomyelitis https://www.ncbi.nlm.nih.gov/pmc/articles/PMC3867676/

[22] Characterization of Biofilm Formation by Borrelia burgdorferi In Vitro https://journals.plos.org/plosone/article?id=10.1371/journal.pone.0048277 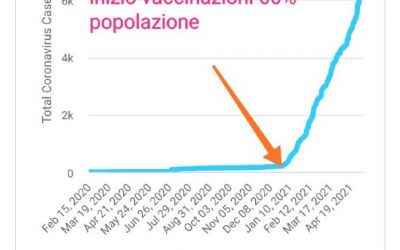 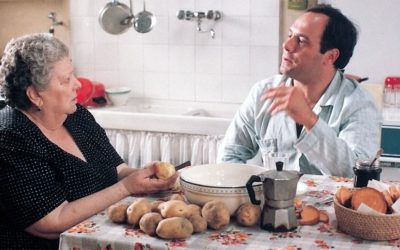 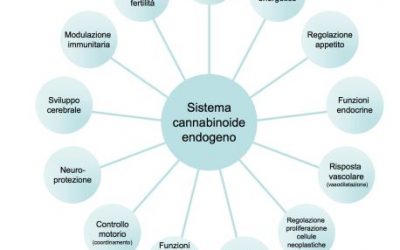