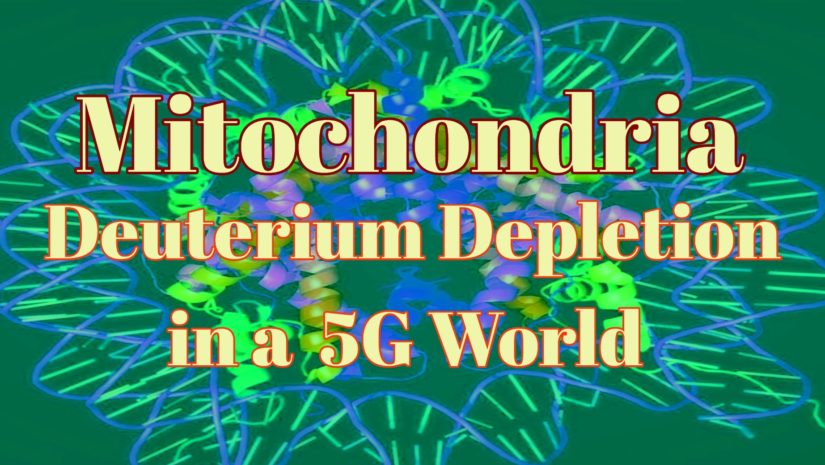 Doris Loh
Doris Loh is an independent researcher and writer specializing in the investigation of familiar and innovative health topics using unique perspectives in traditional and quantum biology. Her training as a classical pianist allows her the freedom to explore concepts and theories with a curiosity that often results in distinctive conclusions. Recent works by Doris are focused on how health and disease are greatly affected by electromagnetic radiation that surround us everywhere we go. Her works on EMF offer insight and solutions to the challenges humans and other living organisms face during this era of change. Major works by Doris include an in-depth series on deuterium, as well as a startling series on the birefringent quantum properties of the major REDOX balancer, Vitamin C (ascorbic acid). The ongoing series on COVID-19 is recognized around the world for the in-depth coverage of the disease and discussion on holistic alternatives for prevention and treatment.
more
Twitter Facebook Google +

Deuterium depleted water (DDW) has been shown to suppress cancer growth and extend survival of lung cancer patients [1]. This amazing effect has led some health practitioners to associate deuterium enrichment with disease progression, leading to the widespread belief that by depleting deuterium, a person can overcome all major stumbling blocks that prevent one from achieving optimal health.

In all living systems on earth, hydrogen plays an essential role in oxidation-reduction processes within cells.  Hydrogen acts as both donor and acceptor in biochemical reactions. It has also been observed that terrestrial organisms display a preference for a specific isotopic resonance that supports their natural growth and development.  Any change in the deuterium/protium isotope ratio can lead to an acceleration or retardation of biochemical reactions [2].

‘Isotopic Resonance’ describes a natural relationship that exists between the stable isotopes of hydrogen, carbon, nitrogen and oxygen.  This Isotopic Resonance is a combination that is exceedingly similar to the average isotopic composition in terrestrial organisms during evolution [3].  Therefore, any radical deviation from this natural equilibrium, whether towards enrichment or depletion, will have negative implications [4].

Oceans on earth typically will conform to the VSMOW standard of 0.268% heavy water whereas natural waters in the Antarctic could be as low as 0.243% [7].

Deuterium isotope content effects can activate or inhibit intracellular processes.  Deuterium-depleted water has been shown to exert antitumor effects with positive results within experimental systems in vivo and in vitro  [8] [1].

When deuterium levels fall below natural abundance levels of <90 ppm, the respiratory chain reaction in mitochondria has been observed to accelerate dramatically, generating large amounts of hydrogen peroxide. Increasing deuterium concentration in mitochondria will inhibit the process [7]. 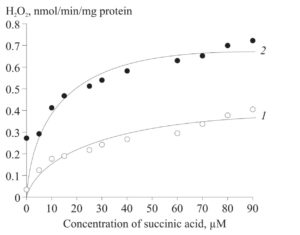 If the theory of isotopic resonance is valid, that means the body will make adaptations as a result of the change in the natural abundance between deuterium and protium.

In an in vivo mouse study published in 2017, scientists found that pre-adapted mitochondria isolated from the livers of rats that consumed deuterium depleted water (46 ppm) still generated 35% more hydrogen peroxide compared with rats that consumed water containing deuterium at natural abundance of 152 ppm [9]. 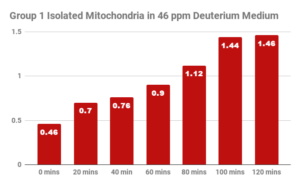 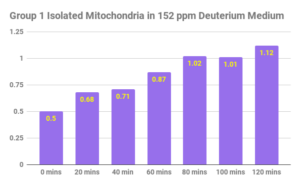 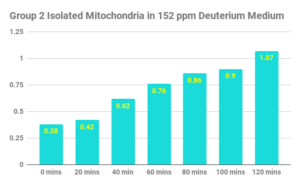 These observed effects may be the result of adaptive reactions that developed in the rats that were fed deuterium depleted water.  A decrease in deuterium can result in rearrangements of biochemical processes in tissues like the liver that has high metabolic activity.

Deuterium exists in nature at a natural abundance of 1 deuterium atom per 6420 hydrogen atoms. When deuterium is combined with oxygen, it forms deuterium oxide, commonly known as Heavy Water (D2O).  A normal 50 kg. human body with about 32 kg of water contains enough deuterium to make 5.5 grams of heavy water [34].

Why do mitochondria generate higher levels of hydrogen peroxide when exposed to decreased levels of deuterium?

The higher levels of hydrogen peroxide generated when there is lower deuterium levels may actually reflect increased oxidative phosphorylation activity in mitochondria.  Early studies on mitochondria plasma membrane ATP synthase in several species of yeasts revealed that H+ ions (protium) extrusion can be reduced by up to 90% when incubated in 99% heavy water [12].

This selective preference for H+ (protium) may be the reason for the increased ROS in mitochondria when presented with lower deuterium concentrations. It also provides the basis for the frequent misinformation that deuterium slows down the rate of rotation in the ATP synthase, reducing ATP production.  The truth is, in the presence of heavy water, the hydrolytic activities of the ATP synthases were not affected by higher levels of deuterium [12], [13].

Lower deuterium concentration in mitochondria may produce higher levels of ATP as a result of increased oxidative phosphorylation. What is the price for this increase?

Hydrogen Peroxide is a Double-Edged Sword

Everything in nature has the potential to be a double-edged sword. Hydrogen peroxide is perhaps one of the best examples. Hydrogen peroxide (H2O2) is one of the major mediators in redox signaling. H2O2 can diffuse through cells and tissues as a messenger molecule, initiating cellular effects that changes the shape of cells. H2O2 can induce the proliferation and recruitment of immune cells [15].   H2O2 can modify cysteine thiols on redox sensitive proteins including peroxiredoxins [16]. Peroxiredoxins are enzymes that play critical roles in the regulation of peroxide levels within cells [17]. The balance of hydrogen peroxide must be tightly controlled because H2O2 are sensed by transcription factors in multiple complex pathways. H2O2 reactions with these transcription factors can lead to the modulation of gene expressions [18].

Increased levels of hydrogen peroxide is associated with biomolecule damage. When human endothelial cells are exposed to excess H2O2, they showed elevated intracellular calcium concentration and increased calcium release from endoplasmic reticulum [19].  H2O2 is also capable of targeting DNA, causing single or double-stranded breaks, in addition to DNA cross links. Hydrogen peroxide has been observed to exert both nuclear as well as mitochondrial DNA damage in various types of cells in humans. [20], [21].   H2O2 is now recognized as cause for aging, inflammation and cancer metabolism and metastasis. [22]

If deuterium levels below <90 ppm can dramatically accelerate respiratory chain reaction in mitochondria producing higher levels of ATP, is it possible that mitochondria would generate deuterium depleted water to facilitate this process?

To understand why it is both theoretically and technically impossible for mitochondria to produce deuterium depleted water, let us take a look at what happens to hydrogen ions inside the mitochondria.

The generation of a hydrogen ion transmembrane electrochemical gradient produces energy that can rotate the ATP synthase for the production of ATP.  This electrochemical gradient is regulated by the balance between hydrogen ions trapped in the intermembrane space that is located between the outer membrane and the inner membrane of mitochondria, and the hydrogen atoms within the mitochondrial matrix [23].

Hydrogen ions are translocated into the intermembrane space when NADH is transported through the four enzyme complexes of the Electron Transport Chain (ETC) during oxidative phosphorylation. When three protons re-enters the mitochondrial matrix via the ATP synthase, the energy generated the mitochondria hydrogen ion gradient is able to produce one ATP [24]. 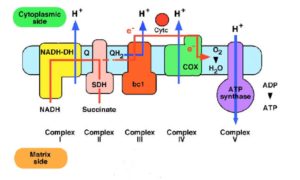 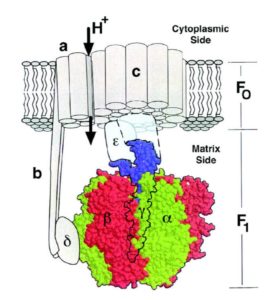 In order to maintain an effective hydrogen ion electrochemical gradient, hydrogen ions are unable to diffuse across the inner membrane after being translocated into the intermembrane space, except through the ATP synthase. So if the ATP synthase is hypothetically 100% efficient in selectively discriminating against the entry of deuterium back into the matrix, does that mean mitochondria can make deuterium depleted water as all the deuterium would end up being ‘trapped within the intermembrane space?

The majority of proton leak activity is catalyzed by specific mitochondrial inner membrane proteins called uncoupling proteins (UCPs).  UPC1 is mainly responsible for converting mitochondrial energy potential into heat in the regulation of adaptive thermogenesis [26]. Whereas UCP2 and UCP3 have been found to be associated with the regulation of reactive oxygen species (ROS) levels in mitochondria [27].

Uncoupling Protein 1, also called thermogenin, generates heat by allowing the influx of hydrogen ions back into mitochondria without the synthesis of ATP, effectively ‘short-circuiting’ the mitochondria ‘energy battery’, releasing energy in the form of heat [26]. 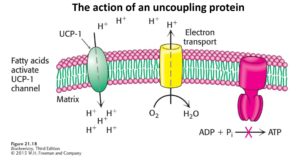 UCP1 can be activated by exposure to cold (cold thermogenesis, CT) [28], or agonists like Resveratrol and Quercetin [29].  The activation of UCP1 allows the re-entry of translocated hydrogen ions from the intermembrane space in mitochondria, effectively redistributing ‘trapped’ deuterium in mitochondria matrix.

Mitochondria Water is NOT Deuterium Depleted

Due to the effects of proton leaks, mitochondria matrix will always have deuterium present in the ratio that reflects the natural abundance found in the food and water ingested by the organism.

If you understand how water is made in the mitochondria, you will realize that it is technically impossible and theoretically improbable that mitochondria would produce deuterium depleted water.

The fourth complex in the electron transport chain in mitochondria is composed of three cytochrome proteins.  This complex contains two heme groups and three copper ions. The cytochrome holds an oxygen molecule tightly between the iron and copper ions until the oxygen molecule is reduced completely.  The reduced oxygen molecule then picks up two hydrogen ions from the matrix space to produce water (H2O) [30].  There is no selectivity involved in this process. The oxygen molecule will not, and cannot discriminate between a proton and a deuteron.

The only way deuterium in mitochondria is ‘exported’ is via excretion of water through Aquaporin-8 water channels [31] and metabolic processes involving the utilization of substrates that have incorporated deuterium through irreversible enzymatic exchanges [11].

It is also theoretically improbable that mitochondria would produce deuterium depleted water.

Cytotoxicity in Deuterium Depletion –  Implications in a 5G World

A study on human adipose-derived stem cells that was released in August, 2018, demonstrated that under deuterium content below natural abundance of 150 ppm, there was a stimulating effect on proliferation activity of adipose stem cells. At the same time, deuterium depletion caused chronic cytotoxicity in those stem cells [32].

The authors concluded from their experiments that deuterium concentration close to natural values is the most optimal for living organisms in vitro, and should be taken into account when investigating deuterium action in living systems in vivo.

The increased generation of hydrogen peroxide in mitochondria from deuterium depletion has profound implications.  Considering the fact that one of the most damaging effects of electromagnetic radiation is the production of uncontrolled oxidative stress.

Our world today already contain less deuterium than in the past. As levels of oceans continue to rise, deuterium concentrations continue to drop. Sea levels have risen from -77m 11,500 years ago to +0.2m today.  Deuterium in precipitation, which is the source of all our water, comes mainly from oceans. [33]. As such, we cannot expect to be able to maintain the perfect terrestrial isotopic resonance, critical to all life systems on earth.

[9] Changes in the functional activity of mitochondria isolated from the liver of rat that passed the preadaptation to ultra-low deuterium concentration. – PubMed – NCBI https://www.ncbi.nlm.nih.gov/pubmed/29101745

[13] ATP hydrolysis in ATP synthases can be differently coupled to proton transport and modulated by ADP and phosphate: A structure based model of the mechanism – ScienceDirect https://www.sciencedirect.com/science/article/pii/S0005272810001131

[15] Hydrogen peroxide as a damage signal in tissue injury and inflammation: Murderer, mediator, or messenger? https://www.ncbi.nlm.nih.gov/pmc/articles/PMC4363740/

[23] The c-ring stoichiometry of ATP synthase is adapted to cell physiological requirements of alkaliphilic Bacillus pseudofirmus OF4 https://www.ncbi.nlm.nih.gov/pmc/articles/PMC3651500/

[31] The Inner Mitochondrial Membrane Has Aquaporin-8 Water Channels and Is Highly Permeable to Water  http://www.jbc.org/content/280/17/17149.full.html

Doris Loh is an independent researcher and writer specializing in the investigation of familiar and innovative health topics using unique perspectives in traditional and quantum biology. Her training as a classical pianist allows her the freedom to explore concepts and theories with a curiosity that often results in distinctive conclusions. Recent works by Doris are focused on how health and disease are greatly affected by electromagnetic radiation that surround us everywhere we go. Her works on EMF offer insight and solutions to the challenges humans and other living organisms face during this era of change. Major works by Doris include an in-depth series on deuterium, as well as a startling series on the birefringent quantum properties of the major REDOX balancer, Vitamin C (ascorbic acid). The ongoing series on COVID-19 is recognized around the world for the in-depth coverage of the disease and discussion on holistic alternatives for prevention and treatment. 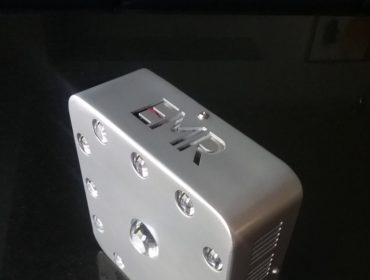 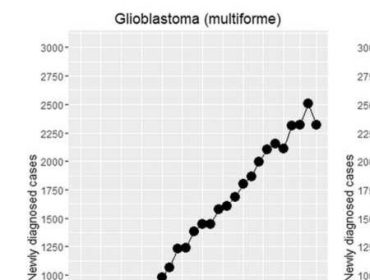 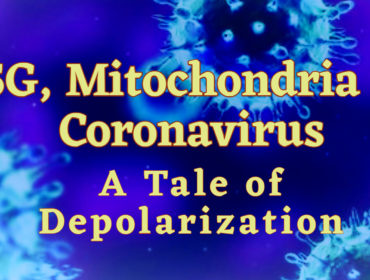