Cristae – The Powerhouses Within 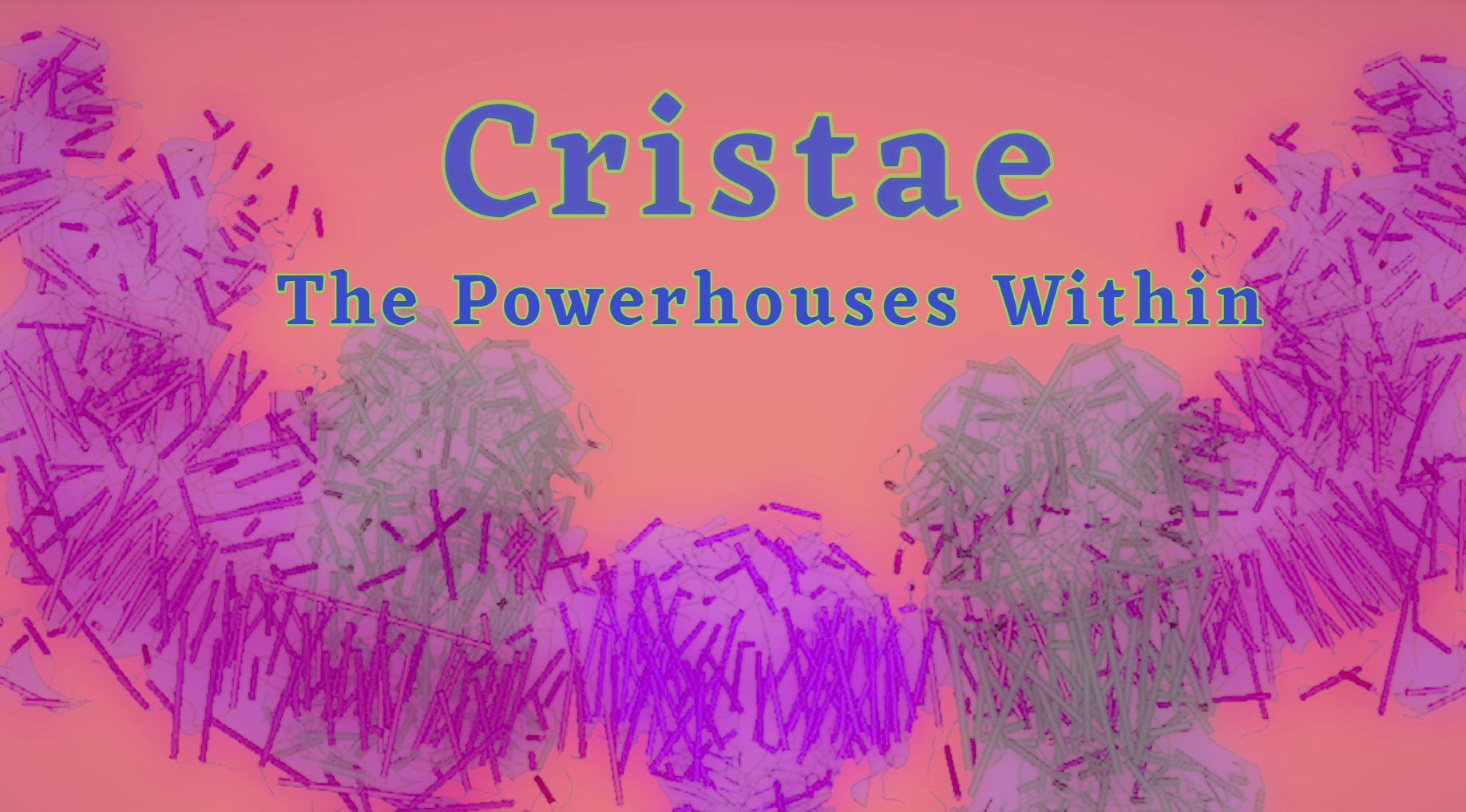 Mitochondria are dynamic organelles that constantly change their shapes and sizes. The shaping of mitochondria affects the functions of the mitochondrial supercomplexes that are located within the folds of the cristae (inner mitochondrial membrane).  The relationship between cristae and the respiratory complexes ultimately determines energy production by mitochondria and bioenergetic capacity of cells. One can say the health of an organism depends on the ability of its mitochondria to change its shape.

Mitochondria dysfunction is believed to be a major contributor in the aging process as a result of decreased energy production or increased oxidative stress due to excess electron leakage in the electron transport chain (ETC).  It is believed that destabilization of the supercomplexes may be a primary reason for the development of mitochondrial aging phenotypes [1].

In many organisms, complex II do not appear to form part of supercomplexes. Complex II of the electron transport chain is not involved in proton pumping [4], but Complex II, or succinate dehydrogenase, can transfer electrons from succinate to ubiquinone, and therefore connect the Krebs (citric acid) cycle to the respiratory chain.  Due to this unique feature, Complex II are seldom seen to form part of any respiratory chain supercomplexes [5]. Yet Complex II have been observed to be very mobile, showing high abundance in close proximity to the cristae junction, especially during remodeling processes [6].

The question whether all four electron transport chain respiratory complexes are involved in the formation of supercomplexes have been questioned ever since the discovery of supercomplexes.  Due to certain limitations in current structural biology and biochemical techniques, this question has not been answered with any degree of certainty nor satisfaction [7].

The discovery of the existence of megacomplexes supports the theory of the circular model where the organization of the respiratory chain complexes fits tightly with the structure of the cristae surface.  Guo et al. also observed a mass of unoccupied area between complex I and complex IV, which could very well be occupied by complex II [8]. A recent analysis of bovine heart mitochondrial was able to demonstrate that pharmacological inhibition of complex I and II can cause the dissociation of supercomplexes, however, complex II has NO EFFECT on the assembly of supercomplexes [25]. 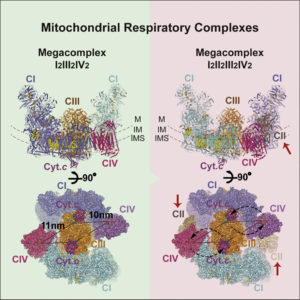 The Single Site Model of Electron Transfer Pathways in Mitochondria

The identification of the exact placement of the various subunits in megacomplexes also led to the proposal of a more efficient electron transfer pathway that could replace the classic Q cycle model proposed by Mitchell in 1975 [9]. If you look at the diagrams below, the Q cycle model shows electrons being transferred in a rather circuitous route (arrows indicate electron transfer pathways).  The ‘single site model’ proposed by Guo et al. allows for the highest energy conversion efficiency based on structural analyses [10]. In this model, not only binding sites are closer in proximity, both electrons of ubiquinol are utilized, while the polar head of the ubiquinone molecule does not have to cross hydrophobic membranes [11].

In a canine model of heart failure, defects in oxidative phosphorylation was identified within the electron transport chain of heart mitochondria. However, the activities of the individual complexes were actually normal.  There was, however, a decrease in the amount of supercomplexes formed between complexes I, III and IV, showing that defective ETC was caused by failure to form supercomplexes, rather than individual component malfunctions [16].

Under stressful cellular conditions such as nutrient deprivation or hypoxia, mitochondria and cristae will change shapes to adapt to changing energy (ATP) requirements.  The remodeling of mitochondrial cristae structure is a critical part of the survival response mechanisms designed by Nature in order to meet changing energy demands during stress or growth and development of the organism [17].

As early as 1966, dynamic changes in cristae structures were reported by Hackenbrock, who observed two reversible conformations in the cristae of mouse liver mitochondria. In the ‘condensed’ state, mitochondria had dense, compacted matrix with enlarged cristae, while mitochondria in the ‘orthodox’ states exhibited a matrix that is less dense with cristae that were compacted [18].

Mitochondria have two lipid membrane layers. The outer membrane is similar to plasma membranes, while the inner layer can be classified into the boundary type that runs in close proximity to the outer membrane, and that of the cristae, which have extended intermembrane spaces and are connected to the boundary membrane via tubular structures called crista junctions [17]. 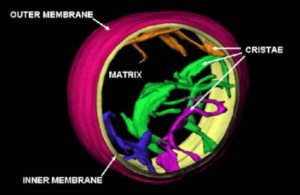 Cristae junctions separate cristae from inner boundary membranes and serve as regulators for the distribution of proteins, effectively partitioning the metabolite content of intracristal and intermembrane spaces.  This important aspect highly influences OXPHOS functions as well as apoptotic events where cristae junctions modulate the release of cytochrome C from instracristal space into the cytosol [19].

Whether cristae junctions are kept in an open or closed state is dependent upon a protein called Optic Atrophy 1 or OPA1.

Optic atrophy 1 (OPA1) is a dynamin-like protein, which are membrane-active proteins that are actively involved in membrane dynamics, with the ability to trigger vesicle formation, membrane fusion or organelle division in eukaryotic cells [20].

The recent investigation into how OPA1 mutations cause mitochondrial defects linked to neurodegenerative symptoms in patients suffering from optic atrophy and Parkinson’s revealed the importance of OPA1 in mitochondrial bioenergetics [28].  Mutations in OPA1 has been associated with Parkinsonism and cognitive decline, where loss of OPA1 functions compromise dopaminergic cell viability [21].

OPA1 is now accepted to be a bifunctional protein that can both promote mitochondrial fusion, and also regulate apoptosis by controlling cristae remodeling as well as cytochrome c redistribution [22].  OPA1 is able to inhibit cytochrome c release, reduce mitochondrial dysfunction and cell death initiated by intrinsic stimuli such as cellular stress. OPA1 can dynamically regulate the shape of cristae, which is required to maintain mitochondrial activity under low-energy environments. Lack of energy substrates can induce OPA1 oligomerization which will narrow cristae junctions [23]. 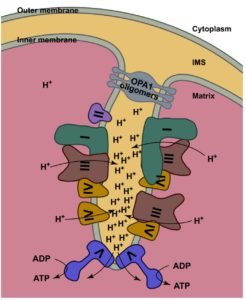 Under nutrient stress created by glucose deprivation, mitochondria cristae repond by increasing the formation of electron transfer chain supercomplexes.  Limited glucose supply forces cells to use mitochondrial OXPHOS to maintain cellular energy supply. Mitochondria increase cristae density and the formation of increased supercomplexes that are housed by these cristae, ultimately increasing ATP energy supply. During these processes, mitochondria reorganize the various respiratory complexes in combination with the expansion of mitochondria cristae.  Overexpression of OPA1 under these nutrient deprivation conditions significantly enhanced cristae density and supercomplex levels [26].

Even a slight elevation in the levels of OPA1 in normal cells can promote cristae tightness and increase the activity and efficiency of ETC proteins [17].  Whereas the loss of OPA1 has been shown to disrupt the shape of cristae, which leads to severe perturbation in supercomplex assembly and energy production capacity [17, 23].  It appears that the disruption of supercomplex formation in the absence of OPA1 precedes both the impairment of mtDNA copy number and the release of apoptotic death signals [17].

The landmark discovery released in October 2019 by Wolf et al. truly elevated the importance of cristae as independent powerhouses within mitochondria .

Cristae Are The True Powerhouses Within

Wolf et al. introduced to the world a distinct new model where cristae within the same mitochondria behave as independent bioenergetic units that maintain different mitochondrial membrane potential (ΔΨm) [29].  This discovery is truly significant in our high tech world that is besieged by electromagnetic radiation. Long-term exposure to electromagnetic frequencies of 900 and 1800 MHz used by mobile phones can cause deleterious depolarization of mitochondrial membranes, leading to mitochondrial oxidative stress, apoptosis and calcium ion influx [30].

In order to maintain a high mitochondrial membrane potential (ΔΨm), the ΔΨ of the cristae membrane must be more negative compared to its neighboring inner boundary membrane, otherwise, protons would not be able to remain in the cristae lumen. The inner mitochondrial membrane (IMM), consisting of cristae and inner boundary membranes (IBM), has long been considered to carry a uniform ΔΨm, and that mitochondria is a single bioenergetic unit.  Nothing can be further from the truth!

Previous experiments that would demonstrate the complete collapse of the mitochondrial membrane potential (ΔΨm) through depolarization depended upon the use of microscopes that allowed for single mitochondrion and not single crista resolution. The time lapse was also at extended lengths of 5-second intervals [32].

Wolf et al. showed that following laser-induced depolarization at  0.30, 0.45, and 0.60 seconds, mitochondrion lost ΔΨm in the areas closest to the site of laser stress first. As time elapsed, by about 2.1 seconds, the entire mitochodnrion lost all of its ΔΨm.

Using high or super-resolution imaging showed cristae are actually individual but interconnected batteries within mitochondria.  This experiment demonstrated that the ΔΨm is actually not homogeneous along the inner mitochondrial membrane, but showed significant differences between cristae.  The authors were able to observe that during transient depolarization, some cristae can maintain polarity despite the collapse of ΔΨm in adjacent cristae. 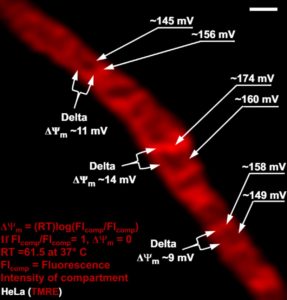 The capacity of cristae to maintain different membrane potential is dependent upon the electrical insulation regulated by cristae junctions. Both the increase and decrease in membrane potential supports different metabolic functions such as ATP production or ROS signaling. It is interesting to speculate that cristae within the same mitochondrion can actually carry out different functions of either ATP production or ROS signaling.  Not to mention the compartmentalization of ΔΨm in cristae are important failsafe mechanisms that can limit the impact of localized damage [29].

With this groundbreaking discovery, it is becoming very clear that the role of cristae morphology has deep implications for human health as perturbations in cristae structure are associated with a wide array of pathologies.  In a world where living organisms are constantly bombarded by electromagnetic radiation, the role of vitamin C, ascorbic acid in the maintenance of cristae bioenergetics and mitochondrial dynamics cannot be understated ….….  To Be Continued  ……..

[2] Supercomplexes in the respiratory chains of yeast and mammalian mitochondria https://www.ncbi.nlm.nih.gov/pmc/articles/PMC302020/

[5] The higher level of organization of the oxidative phosphorylation system: mitochondrial supercomplexes https://www.ncbi.nlm.nih.gov/pmc/articles/PMC2780661/

[20] Dynamin-Like Proteins Are Potentially Involved in Membrane Dynamics within Chloroplasts and Cyanobacteria https://www.ncbi.nlm.nih.gov/pmc/articles/PMC5827413/

[24] During autophagy mitochondria elongate, are spared from degradation and sustain cell viability https://www.ncbi.nlm.nih.gov/pmc/articles/PMC3088644/

[25] Elucidating the contribution of ETC complexes I and II to the respirasome formation in cardiac mitochondria | Scientific Reports https://www.nature.com/articles/s41598-018-36040-9

[31] Coupling of Phosphorylation to Electron and Hydrogen Transfer by a Chemi-Osmotic type of Mechanism | Nature https://www.nature.com/articles/191144a0 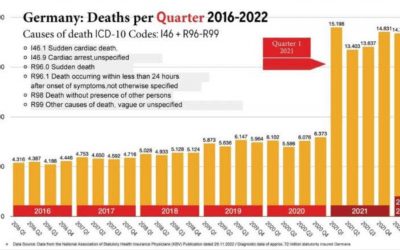 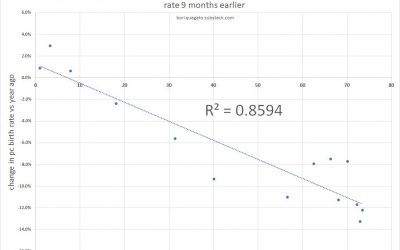 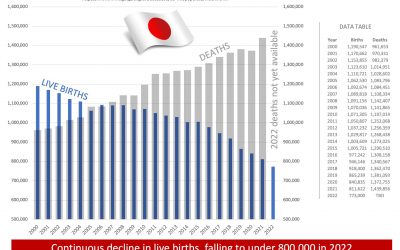 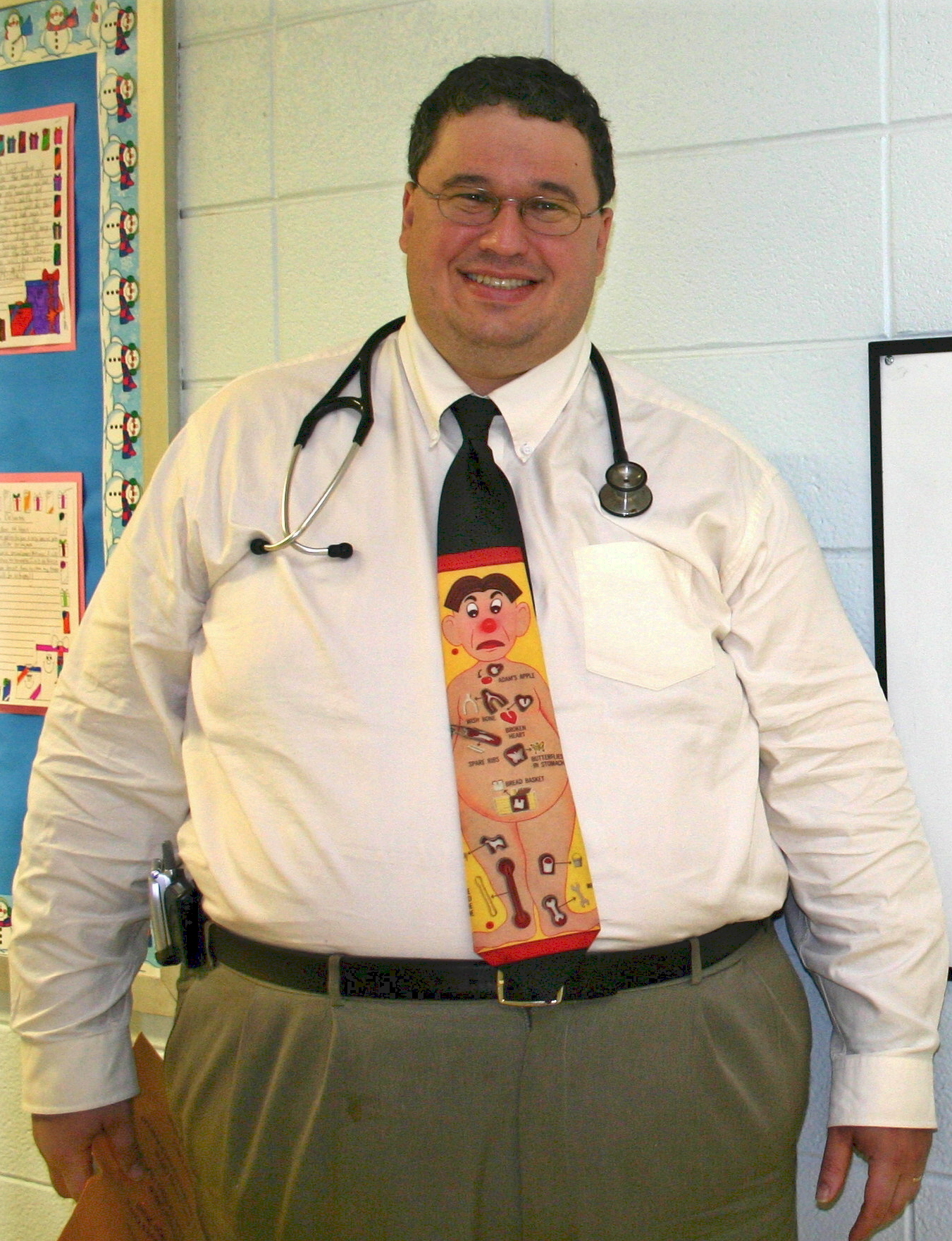 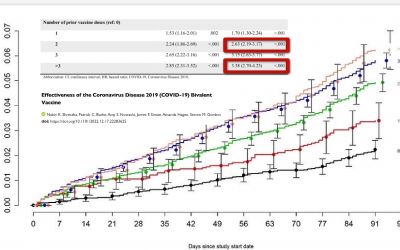